Crooked Claw Miniatures sculpted by Kev Adams.
These are the first 6 of a unit of 30. 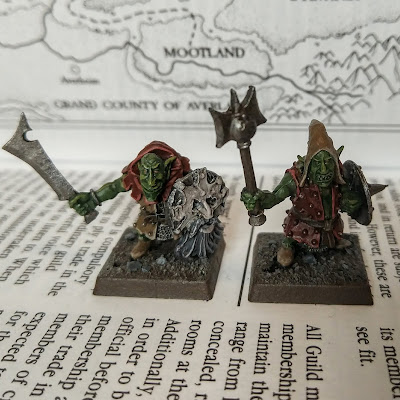 I painted them in muted colours to give them a more brigand and ragtag feel. I did not want them to shine and be silly. The paint job was a bit quick for them. 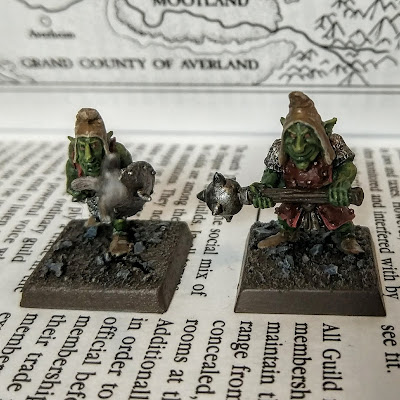 They were pleasant and easy to paint. I will be painting more of them up soon. 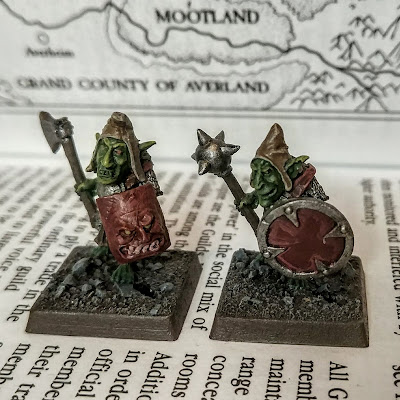 "Goblins are by far the most common of the goblinoid races. They love to inflict pain and suffering on other creatures, and squabble amongst themselves if they have no one else to fight. Lacking fighting discipline, they make very poor warriors and often run away at the first opportunity. In spite of their numbers, Goblins are so disunited and undisciplined that they rarely present anything other than a transitory threat to Human settlements. Their favourite mounts are Wolves or Boars." - WFRP 1st Edition 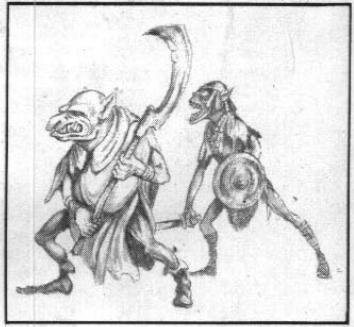 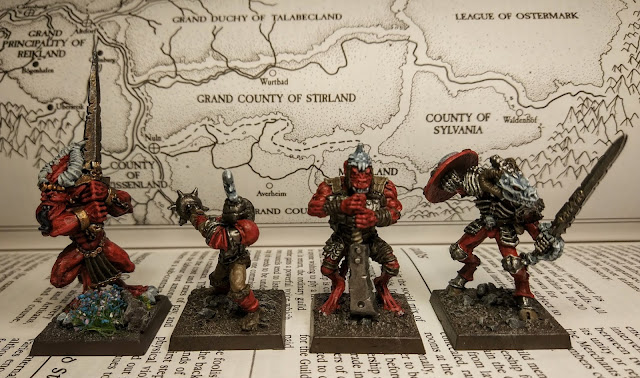 I finished these off a couple of days ago. My brain is rather uninspired at the time, so I can't give you any lore as of yet. It was a bit difficult deciding on the paint scheme. Trying to keep it simple and cold. 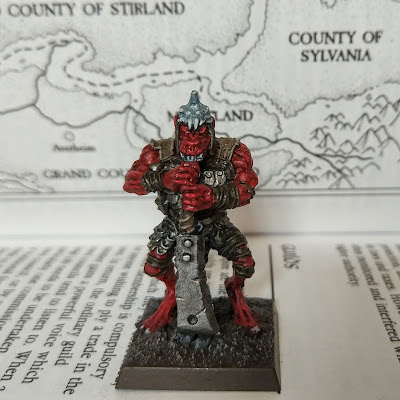 This lovely miniature is from the Pantheon of Chaos kickstarter. Diego did a really good job with it. It's detailed and took time to paint - very worthwhile. 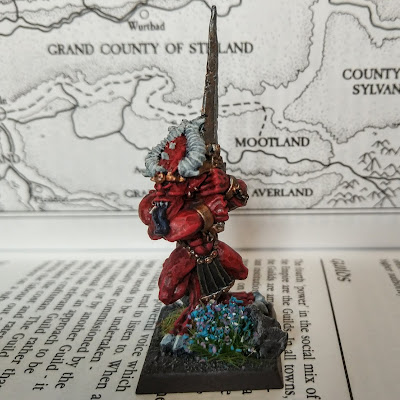 This marauder bloodletter I painted long ago, when I needed to do something else. I'm proud of the paintjob and it inspired me to do the rest in similar fashion. 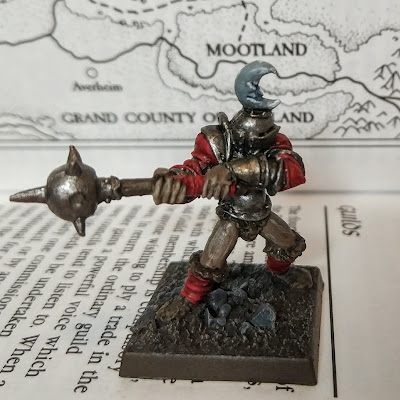 I was close to selling this Chaos Thug, but I'm glad that I kept him and painted him up. 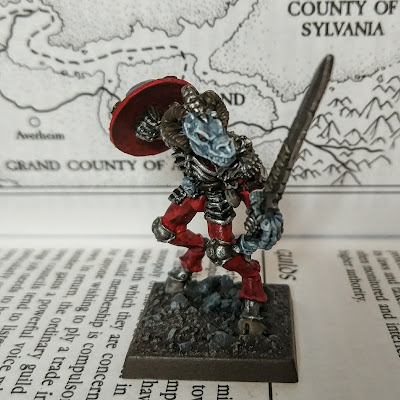 I love this Jes Goodwin sculpt. Might be one of my favourites, but it was difficult deciding on which part should be which colour and I ended up cleaning him acetone because I kept changing my mind. 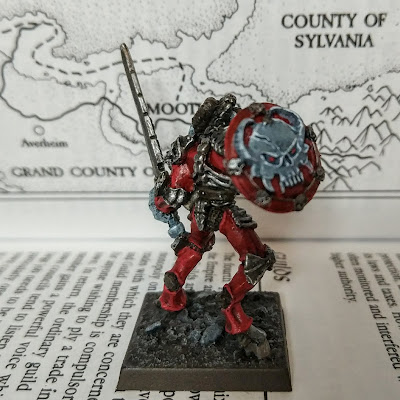 Here is his shield - from the Pantheon of Chaos kickstarter. Fits him well.

Thank you for looking.

"So I grind the azurite to create this lustful blue colour - the cardinal will love it on his coach." - Artisan Apprentice Arne spoken to his Master.
"Push harder boy, else the glass will never be hot enough for me to get it into the right shape." - Glass Artisan Helmut 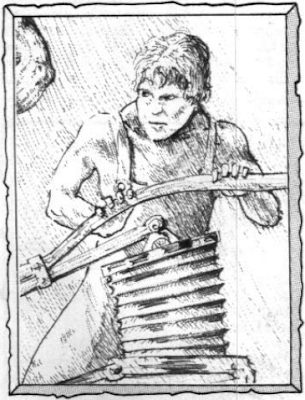 "All Artisans learn their trades by taking an apprenticeship. As apprentices, they learn the skills necessary to their profession, earning their keep in the meantime. Sadly, in all too many cases, they also work long hours for little reward and are given all the unpleasant, menial jobs to do, and they may be unlucky enough to have an ill-tempered, drunken, or incompetent master.

Apprentices who leave their masters before completing their apprenticeship have no trade by which to support themselves and many may become vagabonds or adventurers for want of any other way to make a living." - WFRP 1st Edition

"If we mix the old urine with charcoal and cinnamon powder will make a highly flammable product.." - Alchemist Apprentice Albrect

"I swear to Sigmar if you drop on more vial of Sulphur I will pour acid on your hands." - An alchemist with a clumsy apprentice. 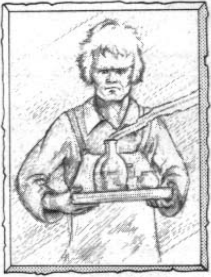 "The only way to become an Alchemist is by serving an apprenticeship with an experienced Alchemist. All too frequently, however, life as an apprentice is all work and no learning. The apprentice is often treated as an unpaid servant and spends too much time scrubbing floors and running errands to learn very much of the Alchemist's art. Not surprisingly, therefore, few apprentices stick it out long enough to become proficient Alchemists." - WFRP 1st Edition

"So men, we must unite! Form unions - the greedy merchants are making us attack each other over pennies. We are the workers, we have the power!" - Agitator Adelhard currently missing.


"These people are noting but rabble-rousers and troblemakers, they deserve the most severe punishment our watchguard can imagine." - Count Marius Leitdorf 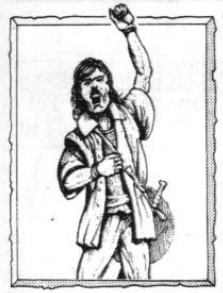 "Agitators are active supporters of causes. Almost any cause will do, from the rights of common Humans (or Elves, Dwarfs, or Halflings) to the state of the drains. They campaign tirelessly to enlist support, addressing meetings, distributing leaflets, and bending the ear of anyone who will listen. To an Agitator, the greatest satisfaction is to see the establishment forced to act by the weight of public opinion. Some Agitators are motivated by genuine public concern, but many more have their own interests at heart - the winning side in a dispute will often reward its most loyal servants handsomely.

Often, the cause of civilisation has been seriously damaged by meddling Agitators, although they can often be the cause of much good. The fact that there can be professional busy-bodies of this kind shows how complicated the Old World is." - WFRP 1st Edition
at December 22, 2017 No comments: 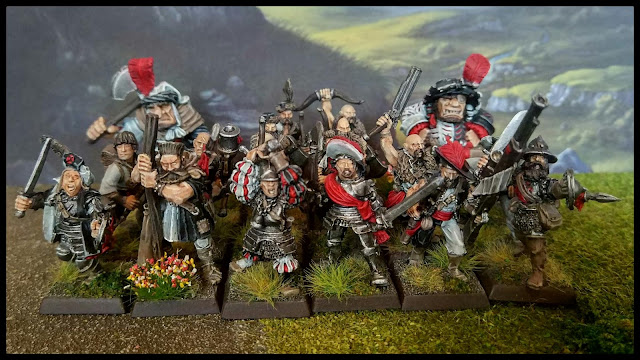 Here we see Baron Walbrecht proudly with his men. Ready to defend their kin against vile monsters.
Hailing from the Grand Principality of Ostland, Sir Walbrecht is a strong supporter of Grand Prince Hals von Tasseninck and also a firm believer in the teaching of our lord Sigmar. He is followed by his loyal (albeit a bit shabby) men, whom have fought be his side in several campaigns to uphold what is just and right. 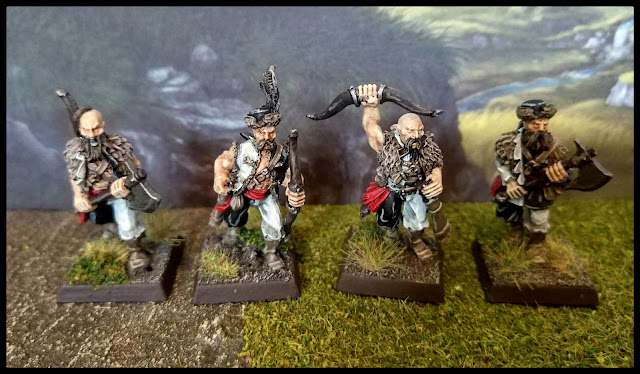 The Holzfäller brothers started out as mere lumberjacks in the dark woods of ostland, now they are expert skirmishers that set traps, plan ambushes and swing their axes against foes of humankind. 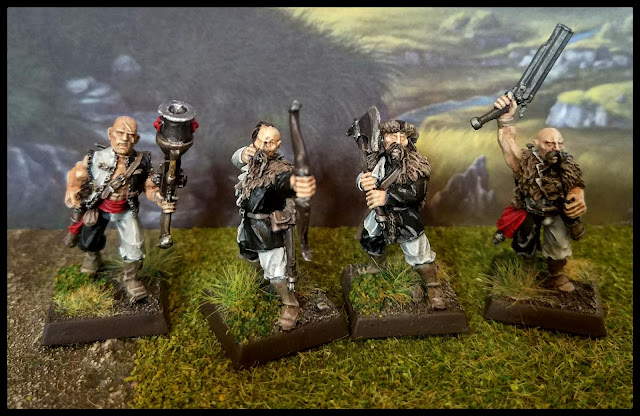 Die Waldbrüders (or the forest brothers) are like many Ostlanders - found of gunpowder and excessive weapons. Their stubborn and bullheaded nature is a good match with the often troublesome difficulties that gunpowder has. Here we see two Jaegers with Kislev roots in the middle, they are flanked by Baldwin Blunderbus and Gotwin grosse-gun. 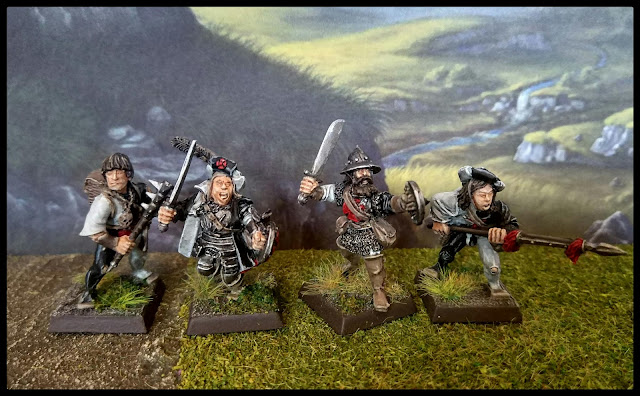 Ralf, Rigo, Rolf and Rudolf are all soldiers. Ralf and Rudolf are still in their late teens trying to figure out how you survive life in this hostile world - if they succeed they might become grizzled veterans like Rigo and Rolf. The veterans have seen countless of battles fighting for their baron. 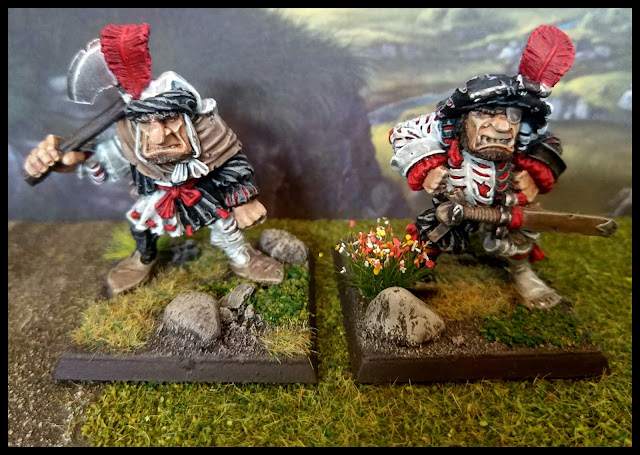 In Baron Walbrechts charge are two smiling giants, the Ogres Odwin and Oswin. As seen they have a bit of different backgrounds. Odwin started out as woodsman, intimidating every tree in miles, while Oswin served as a bodyguard for a careless (and now dead) merchant. Now they accompany the Baron. 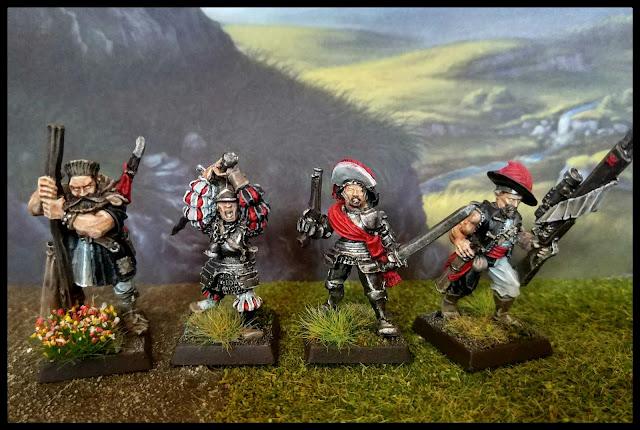 Walbrecht's closest companions and advisors are the Sigmar Friar Erasmus, his personal Champion Conrad, Himself (of course, he is the most important person) and his Marksman Manfred.
This ends the regiment "Baron Walbrecht und die Waldbrüder" hailing from the Grand Principality of Ostland.

On the desk: Terrain board 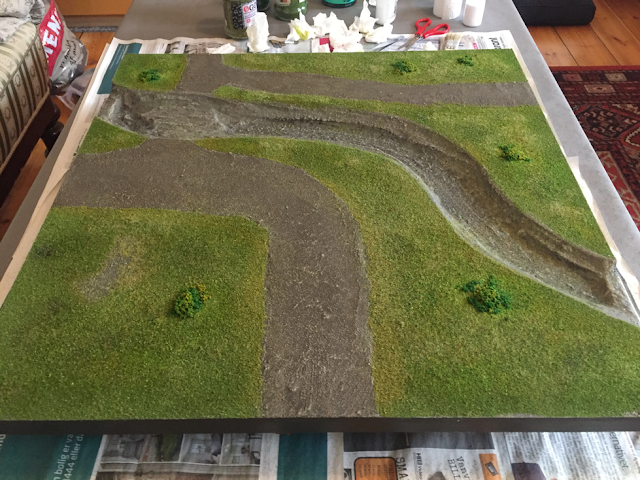 Been a bit silent the past weeks. Not as good as posting as I want to be. I got plenty of painted models I wish to share, but they need their bases finished (which I haven't done) - so you still have to wait for now.

What we have here is one out of four almost finished modular terrain board. Needs a few extra plants and some water. Planning to use envirotex lite for the water.

I've gone with a more green and yellow look as I wanted to be able to field more of a rural board. So far I'm really happy with the process. 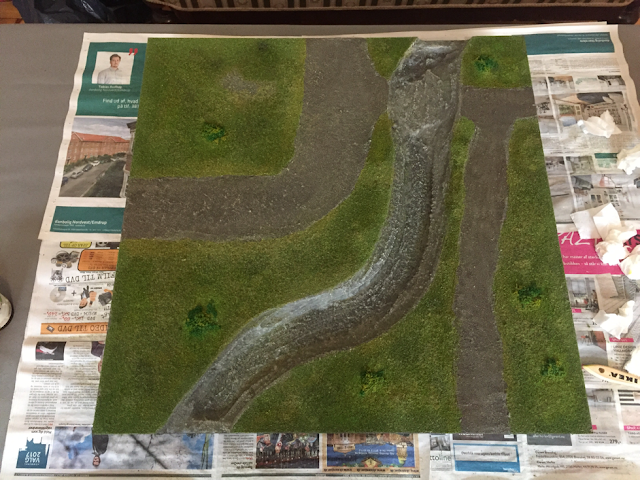 The layout was stolen from Simple As War, check his city-board out. It's amazing.
For the vegetation I was inspired by 1000 foot general who have done a beautiful green board. 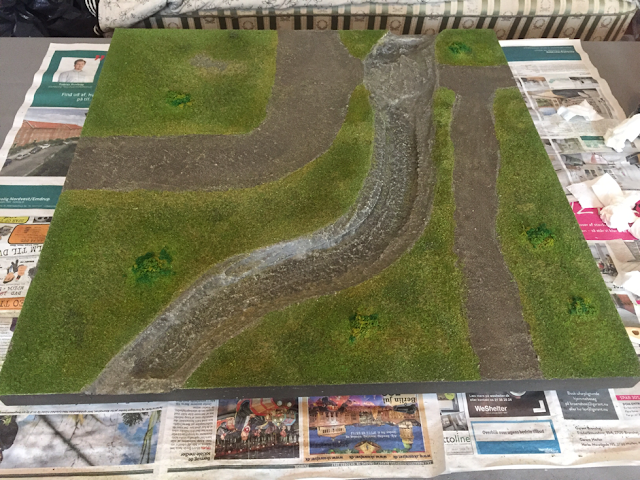 Hopefully I will get based some miniatures up soon and finished the modular board, so I can show you more.
at October 23, 2017 No comments: